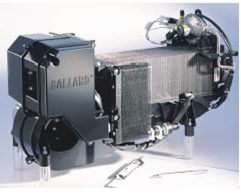 They use as electrolyte a polymeric membrane, based on perfluorinated sulfonic acids, which must be kept completely hydrated during the operation to favor the conduction of the protons. This requirement limits the operating temperature below 100 ºC and is critical to obtain good efficiency. As water is the only liquid used, corrosion problems are minimal. The commonly used catalyst is platinum supported on carbon, or bifunctional metallic electrocatilizadores with base platinum and a metallic element like ruthenium, that makes the electrode more resistant to the poisoning by carbon monoxide when the fuel used is not pure hydrogen. They are capable of working at high current densities, with a rapid response to variable power demands, which makes them very suitable for transport applications; in fact, its higher level of development is due to the interest aroused in the automobile industry.

They require hydrogen of high purity (greater than 99.9999%) at the anode and oxygen or air at the cathode. Any other fuel (ethanol, natural gas, gasoline and derivatives … etc.) Has to go through a previous process of reforming it to convert it into hydrogen, except methanol that can be used directly in the so-called direct methanol fuel cells ( DMFC, «Direct Methanol Fuel Cell»), which are also polymeric electrolyte. The current challenges are to reduce the cost and increase efficiency, which translates into reducing the platinum load, reducing the thickness of the catalytic layer and optimizing the dispersion of the catalyst, improving the performance of the polymer membrane (increase the ionic conductivity and water retention capacity) and find an alternative material to the graphite for the bipolar plate of high electrical and thermal conductivity, resistant to corrosion, lighter and cheaper. In direct methanol fuel cells (DMFC) the challenges are replacing the membrane with another that allows working at a temperature above 130 ºC and that does not present a crossover problem (passage of the anodic reactant to the cathode compartment through the membrane) and find a more active anodic catalyst for the direct oxidation of methanol. 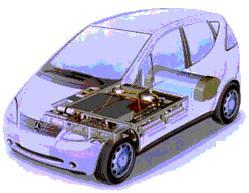 A bit of History

In 1962 General Electric (GE), under the direction of Thomas Grubb and Leonard Niedrach developed the first polymer membrane electrolyte, which is the first milestone in this type of fuel cells. The GE stacks replace the batteries used in the previous Mercury Project in the Gemini Project. A new polymer formulation developed by Grot in 1972 improved the characteristics and durability of the electrolyte and, later, in 1986, Raistrick made major improvements in manufacturing processes. In 1981 Ballard was founded, which began the development of its models in 1983 and in 1989 produced the first conceptual demonstration units. Between 1992 and 1994, they built functional prototypes and in 2001 launched its first NexaTM commercial module. 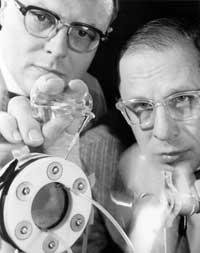 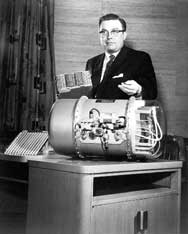 Roy Mushrush, at the time, director of the Department of Energy Conversion of GE, showing part of the 96 single cells of the stack of the image. The Gemini Protecto ships incorporated three of these modules.