A cell or fuel cell is an electrochemical device that converts the chemical reaction energy directly into electrical energy, while supplying fuel and oxidant to its electrodes, with no other limitations than the processes of degradation or malfunction of the components. As a result of the electrochemical reaction, water and electricity are produced. The water leaves the fuel cell through the electrodes and the electric current passes to an external circuit.

In principle, any substance susceptible to chemical oxidation, which can be supplied continuously to the cell, can be used as fuel. Likewise, any substance that chemically reduces quickly enough can serve as an oxidant. Hydrogen and gaseous oxygen are the fuel and oxidant chosen in most fuel cell applications. Hydrogen presents a high reactivity in the presence of suitable catalysts, can be obtained from hydrocarbons, and reaches a high energy density when stored cryogenically for applications in closed environments. Oxygen is obtained directly from the air and its storage is easy and economical.

The global reaction that takes place in a fuel cell is the combination of hydrogen and oxygen to form water: 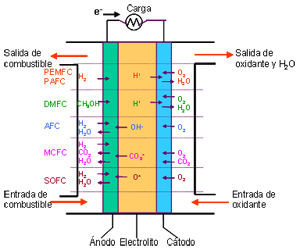 Unlike conventional combustion, in fuel cells, comburent and fuel do not come into direct contact. The oxidation of the fuel takes place at the anode (oxidation half-reaction), while at the cathode the oxidant consumes the positive ions of the electrolyte and the electrons generated at the anode (reduction half-reaction), which are moved by the difference in potential generated between the two electrodes.

The basic elements of a fuel cell are the electrodes, the cathode, positive pole, and the anode, negative pole; the electrolyte, the substance responsible for transporting the ions produced in the redox reactions; the matrix, which contains the electrolyte and which is not necessary when it is solid; and the bipolar plate, which acts as a current collector and gas distributor.

HISTORY (The origins of Fuel Cells) 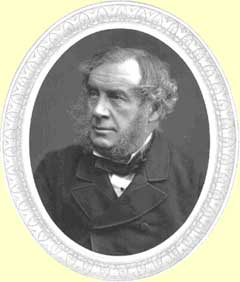 The original idea dates back to 1839, when a Welsh jurist, Sir William Robert Graves (1811-1896), designed the first device. For its preparation, it used two platinum electrodes submerged in sulfuric acid, which fed with oxygen and hydrogen, respectively.

Connecting six of these devices in series, he used them as an electrical generator to decompose the water. Subsequently, other inventors were introducing certain modifications, thus, in 1855, Becquerel built another cell that consumed carbon from a molten nitrate electrolyte (potassium nitrate) contained in a platinum container.

In 1894, Mond and Langer used platinum plates with small holes as electrodes, which they coated with platinum black, using as electrolyte diluted sulfuric acid within a porous matrix called paris.

Configuration of the William R. Grove device, according to its publication
«On the Gas Voltaic Battery», Philosophical Magazine and Journal of Science (1843) p. 272

But the true technological development of these devices took place, thanks to Francis T. Bacon, already entered the twentieth century. In 1952 a 5 kW plant was built based on the hydrogen / oxygen technology that had been developed since 1932. The cell consisted of a nickel anode, a lithium nickel oxide cathode, and a potassium hydroxide electrolyte. concentrated at 85%; operated at a temperature of 200-240 ° C, and at a pressure of 30-40 bar that prevented boiling of the electrolyte. This pile served as the basis for developing the auxiliary energy sources of space vehicles. But it has been due to the global energy crisis that was experienced from 1973, when there has been an increase in the study for the development of fuel cells.

For more information on the history of fuel cells, see the Fuel Cell Project page of the Smithsonian Institute
(http://americanhistory.si.edu/fuelcells). 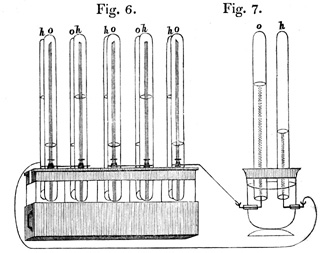