Conference on Energy Transition and Sustainability held at CIEMAT 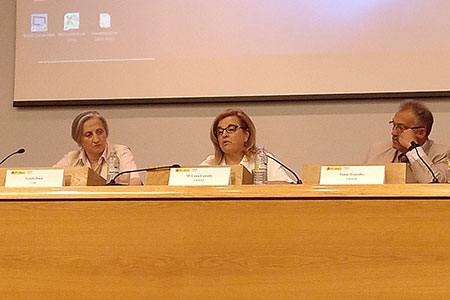 Today the Conference on Energy Transition and Sustainability took place at the Assembly Hall of CIEMAT.

The presentation was given by the Director of the Department of Energy of CIEMAT, Mrs. María Luisa Castaño, who was accompanied by Mrs. Loreto Daza, President of APPICE and Head of the Hydrogen and Fuel Cell Group of the Institute of Catalysis and Petrochemistry (CSIC), and by Mr. Tomás González Ayuso, Head of the Fuel Cells and System Integration Unit of CIEMAT.

In Panel 1 of papers, Mrs. Loreto Daza spoke, with her conference entitled Sustainable Energy Consumption or Evacuation to Mars, and Mr. Ángel Martínez Martínez, Director of Programs at JALVASUB Engineering, with his Conference entitled Technological Challenges in the Transportation Sector.

In Panel 2 of papers took part Mrs. Begoña Ruiz de Gordejuela Hidalgo, Higher Chemical Engineer in Hydrogens of the Nervión by H2Planet, with his Conference entitled Contribution of the fuel cells to our life. Projects that are already a reality; Mr. José Manuel Fenollar, of MODULAB Arquitectura y Vivienda S.L., with his Conference titled Energy Efficiency and Sustainability in Building; and finally, and closing the day, intervened Mr. Javier Brey Sánchez, CEO of H2B2 Electrolysis Technologies and Vice President of APPICE, with his conference entitled Hydrogen as a way to an energy transition.